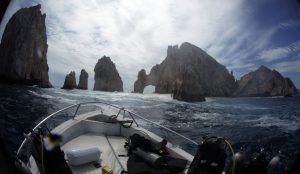 From scuba diving in the Pacific Ocean at the sea lion colony that sits above a large shipwreck, to the huge canyon wall of the Sea of Cortez on the north side, the diving here in Cabo San Lucas is hugely understated and mightily impressive. You would think that between the hundreds of boats that tour the bay every week and the hotel-sized cruise ships bringing guests in their thousands to the docks of Cabo the underwater realm of Los Cabos would quickly become saturated; a slim chance of any decent animal encounters.

In fact the opposite is true. The meeting point of two significant oceans makes for some utterly outstanding diving here in Cabo San Lucas. Take a boat 30 minutes further north into the mouth of the Cortez and you’ll have a selection of empty dive sites to choose from: the area we call The Corridor. 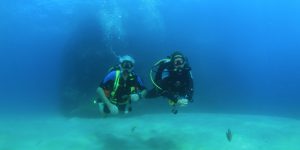 This is one of the more popular dive sites for a variety of reasons. The buoyed safety area dedicated to snorkelers and divers makes this an appealing dive site for courses and first timers. No matter how busy Pelican Rock may appear at the surface with snorkelers, kayakers, sailboats and paddleboard enthusiasts, there is always amazing wildlife underneath and a good guide will find you space thanks to the vast canyon wall. Finally, this site is always sheltered from whatever weather is trying to spoil our fun out in the Pacific Ocean at The Arch.

Neptune’s Finger is dramatic pinnacle, piercing the surface of the water in the shape of an upside-down Baja California Sur. It is an advanced dive site if you want to go and see the beautiful fan coral fields down at 100ft/30m. As with most dive sites in the bay it sits on a sloping rocky wall and, for this reason, you can choose your depth. A wall at 18–24m/60ft–75ft and a small cove at 12m/40ft allow you to make this a shallow dive – however, buoyancy needs to be good due to the boat traffic.

If you visit Cabo when the swell is low and the Pacific winds aren’t blowing a gale, you’ll have the chance to make one of the most interesting dives in the area. The Lungberg cargo ship went down here in the 1950’s after losing engine power in a storm. It now lies scattered at 12-15m/40-50ft. The Sea Lions play at the wreck and if you’re lucky they will let you join them. A small channel at the side of their colony allows you to pass back and forth between the Sea of Cortez and the Pacific Ocean. Currents that swell at the point can make for an interesting drift dive to the Land’s End pinnacle (rumoured to be the most southern point of Baja California) where you can see sea lions hunting huge schools of fish. Pelagic game fish are often spotted here, as are occasional whale sharks and humpback whales.

The shallow waters at Chileno Bay are more impressive than the deep. Coral is much healthier in the Corridor than in the shallow waters of Cabo San Lucas because of less human impact. Diving from one side of the rocky outcrop to the other you can surround yourself with schooling jacks, snappers and grunts. Check under rocky boulders for reef shark. It is common to see turtles, eagle rays and mobula rays passing by.

Named after the hole in the caves above that create a blowhole when the waves hit and blow through. This dive site has beautiful corals in the deeper water and there’s a resident white tip reef shark in one of the rocky caves. Huge morays can be seen down here.

The shallowest dive but by no means inferior. The underwater channel here leads through some of the most interesting topography in the area. Channels lead to chambers and then eventually out into a rocky clearing with huge rocks covered in soft coral. This place is famous for spotting eagle rays.

3 Replies to “The Dive Sites of Los Cabos”