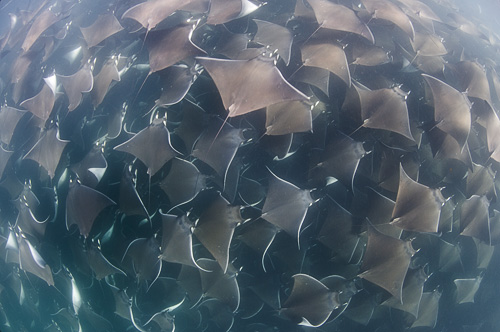 It’s first light in Cabo San Lucas, the sun is rising over the entrance to the marina and a pink sky frames the open ocean inviting us to explore the deep blue sea. There are few boats out as dawn shifts into early morning and we are excited to see the calm seas ahead.

We are going to see one of Cabo’s most spectacular natural events: the schooling mobula rays.

What kind of Mobulids are found in Los Cabos

Simply put; they are a type of ray that belongs to the Mobulidae family and has genetic similarities to the famous giant manta ray. They appear to ‘fly’ midwater using their pectoral fins and for this reason; some refer to them as ‘flying mobula’. They use propulsion to launch themselves out of the water before making a large slapping noise as they crash down to the surface and this is how we find them out in the blue. More on their behaviour later!

There are records of mobula ray growing up to 5 meter long, although we see smaller ones on our Blue Water snorkel tours. Also referred to a Munks devil ray for their horn shaped lobes on the front of their head, the Munkiana mobula species that arrive in Cabo in summer are some of the smallest in the mobula family with maximum fin spans reaching only 1m; but the average is much less.

Why the Devil Rays migrate in Baja California?

Much is still unknown about the mobula rays of Baja California Sur and their behaviour patterns, although the Mobula Conservation Project is making moves to study them in great detail and have even found nursery grounds further north.

Their visits coincide with the upwelling that maximises in April – June which pushes zooplankton up into our waters. So maybe their behaviour is also a feeding frenzy. (Source : nature.com).

The best months to reserve a Mobula Snorkeling tour is June and July although we do start to see groups in mid-May or as late as mid-August.

Behaviour : Why the Mobula jump out of the water

We know they have arrived in Cabo when we observe them ‘popping’ from the surface like popcorn, making huge slapping noises as they belly flop down onto the surface. This causes a large sonic boom underwater and this is highly speculated to be a form of communication to others: either to attract the attention of a mate, or signal to others where the squadron is heading for safety in numbers.

They can jump as high as 6ft out of the water and even do a number of flips on the way down. Research is currently being done into their aggregating behaviour. Some theories favour the idea that they are ridding parasites from their skin while others say that this is part of a mating ritual. It could purely be accidental considering the mobula ray’s only form of defence is speed and agility.
On the other hand, maybe they just jump because they are happy! 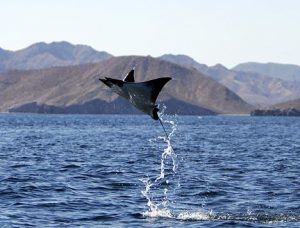 When encounter with the Mobula Rays in Cabo San Lucas ?

Every summer Cabo enjoys the arrival of impressive schools of mobula rays traveling in their hundreds of thousands. Huge schools congregate at the surface where snorkelers can see them spinning, gliding and breaching out of the water for reasons that leave the scientific community baffled in awe.

In June to August the visibility is reduced but this is the time of year when we have the amazing mobula ray aggregation. Right in the bay you can be swimming with thousands of schooling mobula ray: cousin the the more famous manta ray.

Seeing such a remarkable number of mobula rays is thrilling and a once in a lifetime opportunity. Snorkelers and free divers can treat themselves to one of nature’s great events on a short tour from Cabo. Don’t miss out!

Tours usually run from May to July when large schools are more predictably seen.

Check Out our Mobula tour 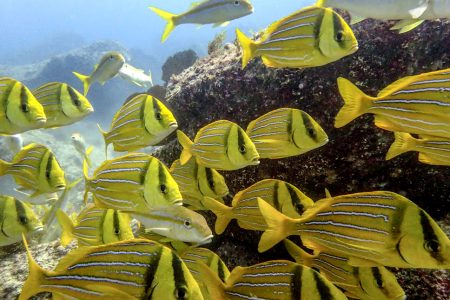